The Compounding Power Of Habit

very person around us has some kind of habit which they perform on a regular basis. It may be checking phone, reading books, cooking, smoking, cycling, running, waking up early and many more.


So what a habit is all about? A habit is a routine or practice or an act performed regularly; an automatic response to specific situation. These infinitesimally acts shapes a person identity and thought process. If you are a scientific person then you must have heard about the universal element - 'atom'. You can't see them through your eyes but they are responsible for existence of everything including you and me. Anything you see is a product of intricately arranged atoms. The order of arrangement of atoms creates different entity each time. Our habits works the same way. You get what you repeat. Repetition of good habits will automatically lead you to a good outcome and bad habits produces bad outcome. In order to make a meaningful difference, a habit need to persist long enough. Every time a habit is performed our brains goes through some phases i.e cue, crave, response and reward. A habit cannot be formed if any one is missing.


Cue: A piece of information that suggests there is a reward to be found, like the smell of cookie or rose or the satisfaction after smoking.


Response: Whatever the action you take to get the reward i.e when you actually start eating it.


Reward: The satisfying/unsatisfying feeling you get after doing it along with the lesson whether to do it again or not.

If any of these phase (cue, crave, response and reward) goes missing, a habit will never form. Eliminate the cue & your habit will never start. Reduce the crave, you won't get enough motivation to act. Make the behavior difficult & you won't be able to do it. And if the reward fails to satisfy your desire then you have no reason to do it again. It's a kind of loop. We can call it a 'Habit Loop'. 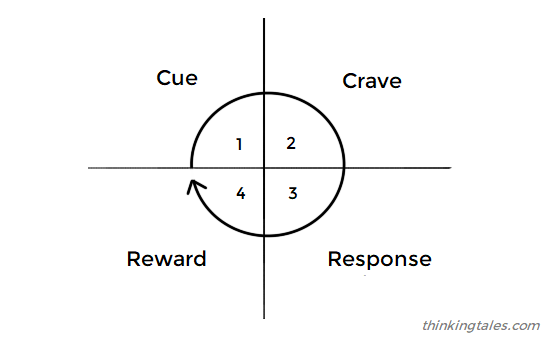 In 1898, a psychologist named Edward Thorndike conducted an experiment with some cats. He was interested in studying the formation of habits in humans and animals. His experiment would lay the concept behind the habit formation. He would place each cat in a device known as a 'puzzle box'. The box was designed in such a way that the cat could escape by pressing a sort of button or lever and run to a bowl for food. He then placed each of his cats one by one and analyze their course of action towards the situation. After many trials, the cat learned how to dart out of the box by pressing the button inside each time. Gradually, the cat's course of action became an automatic response to the situation. Alongside, he jotted down the time taken by each cat to escape. For example, the 12thcat took the following time while escaping: 160 seconds, 30 seconds, 90 seconds, 60, 15, 28, 20, 30, 22, 16, 15, 20, 12, 10, 14, 10, 8, 8, 5, 10, 8, 6, 6, 7. After 20-30 trials, the cat made fewer mistakes and their action became quicker and more automatic. From his studies, Thorndike made the following conclusion about habits : a behavior which produces satisfying consequences tends to stay much longer (maybe a lifetime) than those which produces unpleasant consequences.


Most people still wonder about the benefits of habits. Questions like "Will habits make my life dull? Doesn't it take away the vibrancy and spontaneity of life?" creates a dichotomy. Such arguments makes you think like you have to choose between building habits and attaining the freedom of life. But in reality, habits do not restricts your freedom, they creates it instead. In fact, people who are not dialed in with good habits are the ones struggling for freedom. Without good financial habits, you always seem to be struggling for the next dollar. Without good health habits, you always seem to be short on energy. Without good learning habits, you always appear to be down on the learning curve. Our habits makes the fundamentals of life easier in order to create more mental space and prepares you for the new challenges. Building some effective habits in the present will allows you to do more of what you want in future.


Compound interest is the 8th wonder of the world. He who understands it, earns it; he who doesn't, pays it.


Conclusion: Habits are like compound interest which compounds over a span of time. If you are not getting notable outcome of your work means its getting stored. In order to see to the effects you must surpass a critical threshold. So next time, if you walk into a restaurant and ordering a health conscious eatables like salad instead of junk stuff would a good choice to start small.

This article originally appeared in the book 'Atomic Habits' written by James Clear.

5 Books That Worth Reading

What you should read next...