ou might have heard a tale of little girl named Goldilocks and the three bears. A girl walks into an unknown house (if you haven't heard the story) and saw three porridge on a table. She ate the one which was neither too hot nor too cold and went to sleep. Apparently, it appeared that this was bears' house. So, what's the moral of the story? Of course, we should never step in any stranger's house. But actually, it has a much deeper meaning. So what does the Goldilocks Rule mean? 'Goldilocks condition' is also a term of astrobiology, which determine how life could potentially thrive within a star's cirsumstellar habitable zone (CHZ). The rule is not just applicable over humans but also on our ever-expanding universe. Why Earth is at just right for life while other planets are inhospitable? Its the Earth that fills the bill, whereas Venus roasts and Mars exists as a frozen world.


James Clear, an author, entrepreneur and a photographer puts very well in his book 'Atomic Habits'. He says that, scientists have been studying motivation for decades, while there is still much to learn, one of the most consistent findings is that is that perhaps the best way to stay motivated is to work on tasks of 'just manageable difficulty'. In order to make it more clear, he took tennis as an example. If you play tennis with a toddler, you will get bored quickly while playing against a pro and you loose quickly. So the opponent should be of almost equal skill as yours. We call this phenomenon 'The Goldilocks Rule'.


The Goldilocks Rule states that humans experience peak motivation when working on tasks that are right on the edge of their current abilities. Not too hard. Not too easy. Just right. 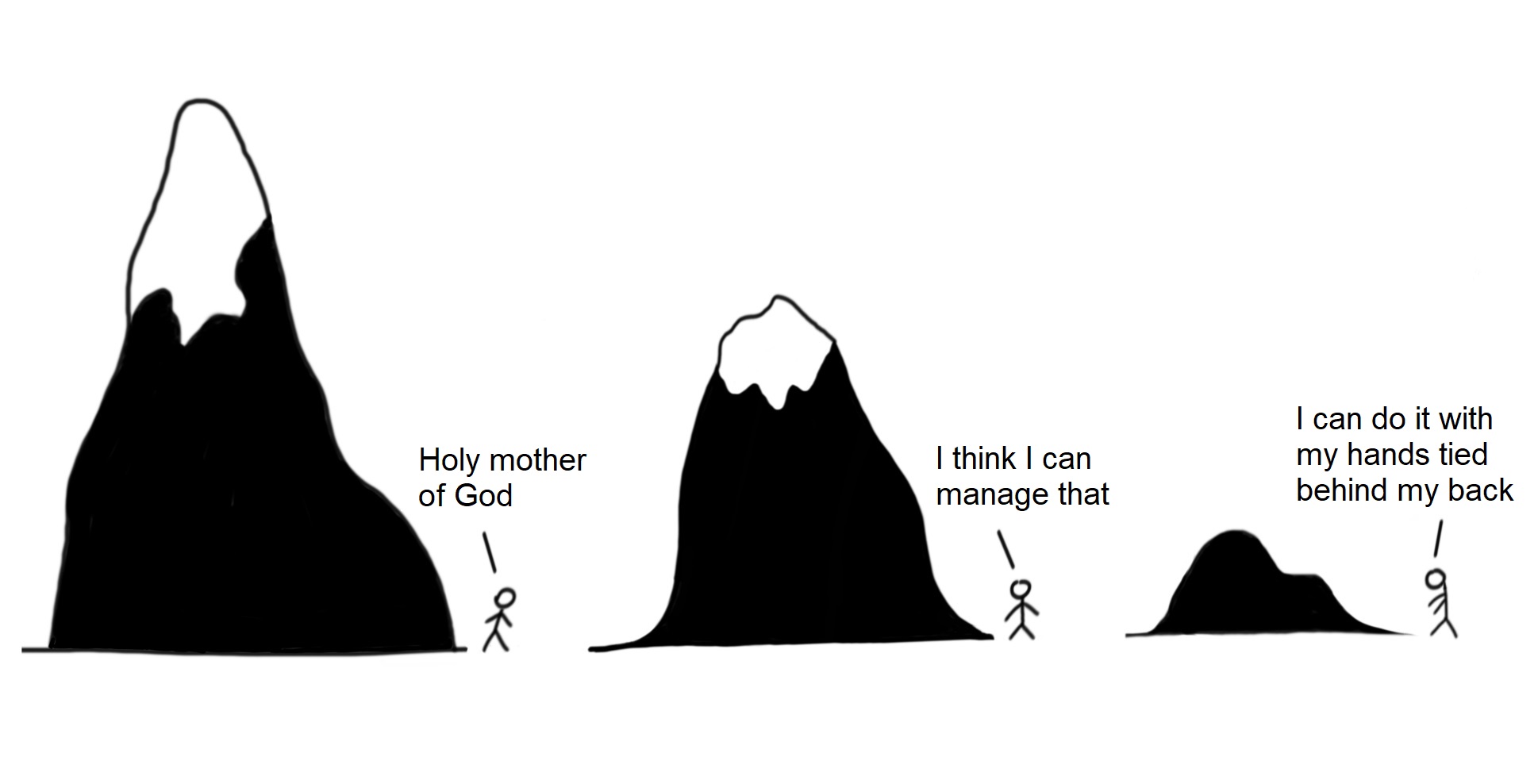 Human brain loves to be challenged, but only within an optimal zone of difficulty. The relatable graph (below) shows how our 'motivation level' fluctuates when given various tasks with varying difficulty. You will either experience boredom or failure depending upon the difficulty of the tasks given to you. Our motivation level begins to decline at both the extremes, either working on an extremely easy or difficult point. That's why in order to stay motivated, we must work in our 'goldilocks zone' where every kind of tasks will fall under where you can handle it with just a little bit of effort; right at the edge of our ability. 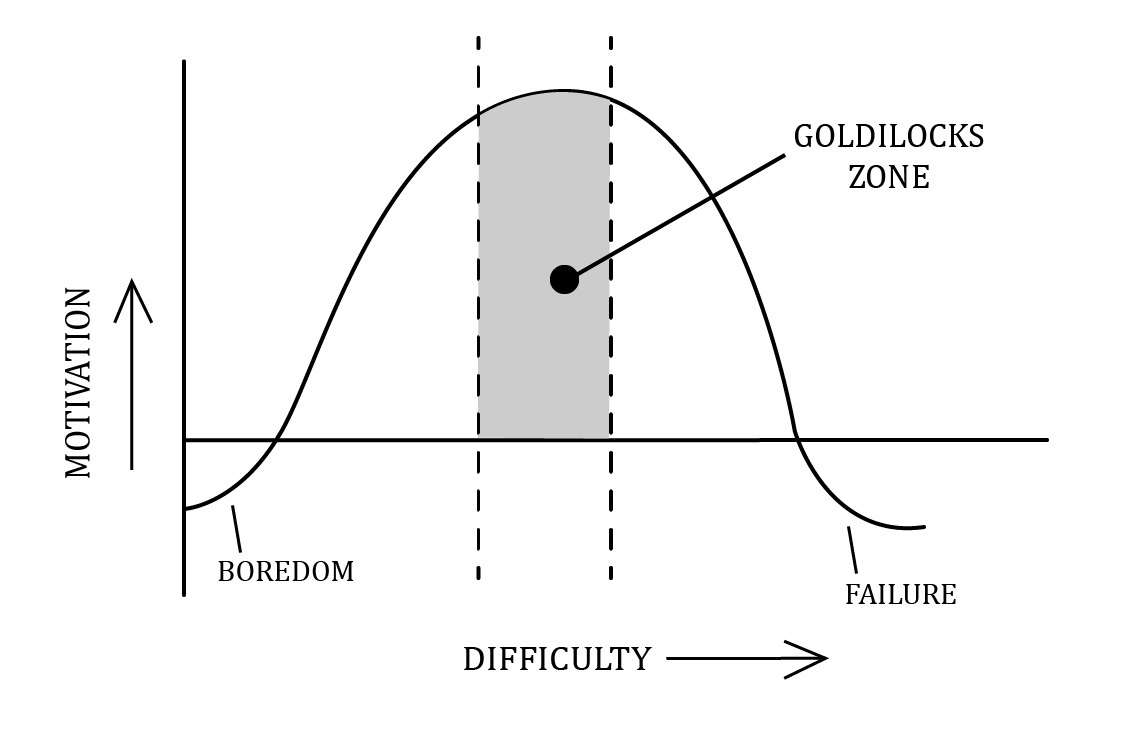 But sometimes its not the only case. People also feel motivated with an easy or difficult task as well for a short duration of time. At both the extremes, you can't stay motivated for longer period of time but you can, if you lie within the shaded zone. Boredom is the silent killer of our progress and our daily systems. Our brain wants to live on the edge of our current abilities.


He also shares an amazing story of a 10 year old boy who walked into Disneyland in Anahiem, California back in 1955, the year it opened. He asked for a job. Labour laws were laxer back then and somehow he managed to land a job. He began selling guidebooks for half a dollar each. A few months later, he escalated his position and started working at Disney's magic shop. There he was fascinated by the tricks perfomed by older magicians and started experimenting with the jokes. Eventually, he fell in love with whatever he used to do and began showing his simple gag routines out on the people coming into the shop. By the time he was a teenager, he had started entertaining people and set his aim on becoming a comedian.


As a result, he started receiving fame and popularity on a smaller scale and very soon some small clubs were hiring him to do a short comedy routine but not more than 5 minutes. People were busy in talking and drinking - not even listening to him and he didn't let it bother him at all. So he continued work on his passion. At 19, he expanded his routine to 20 minutes and again getting hired by bigger and better clubs which gave him a decent paycheck. Every year, he enhanced his acts bit by bit, adjusting and refining it. Around 1970s, his work transitioned and made him a regular guest on 'The Tonight Show' and 'Saturday Night Live'. From there, he catapulted his career into as one of the top comedians and actors of his generation. Do you know who he was? Any guess?


His name is Steve Martin.


The above Martin's story offers a fascinating illustration on sticking with habits over the long run and seeking just incremental improvements year by year. Through this story, the author suggests that working on the tasks that are just outside of our comfort zone keeps you motivated. These little tasks keeps you stick with the habit even if the conditions aren't even perfect. It is neccessary to continue to advance in small ways. Little improvements challenge us and keeps us engaged - which enables us to live out the Goldilocks rule and achieve the state of flow. In reality, it may not be possible to quantify a task or habit that way - but you get the point - we need to keep our game just a little bit hard to play at a time.


Conclusion: A good rule to remember that our habits are formed based on how often we practice it (frequency), not how much time we spend while doing it. Suppose you really want to quit smoking or you want to join a gym, don't think that tomorrow you'll be better person with only good habits. No, its impossible. No one can achieve something big in just a matter of days. In order to stay happy and motivated, you should take baby steps towards your target and measure your progress alongside until you succeed. You can implement this strategy by using a bullet journal or with any app suitable for you. So, don't be radical while measuring your progress everyday. And remember, middle matters the most.


If you want to hear out more from the author, visit his website jamesclear.com grab his best selling book 'Atomic Habits'.

Seeing Through The Emptiness

Next | Reading Time: 6 min
What you should read next...