always prefer to live my life at as maximum as possible to me. Adhering to this policy, I deliberately avoid over-reacting or panicking because I believe it is better to prepare than to panic; but most emergency aren't. You might have guessed by now what I'm talking about. The invisible enemy lurks around every corner; the food we eat, stuffs we touch and in the people we love. Yeah! Its the nCOVID-19. A tiniest primitive invisible creature on earth has been declared as PANDEMIC by WHO (World Health Oraganization) recently.


As of today, on March 22, 2020, we are unsure about the consequences and its resulting disease, COVID-19, may cause in the next upcoming days. And there's no doubt that this is an emergency situation for some. Many people have died, many others are ill and many healthcare providers are risking their lives to save the infected ones. Plus, there's higher probabilty that it may escalate the scenario in coming months. Even government has actively hopped into the battle by awaring people on how to prevent themselves from getting affected by the virus. People are frequently getting notified through messages, emails and a short announcement while making a call to someone about simple precautions one can take everyday. Humanity has already witnessed many earlier pandemics like The Plague Of Justinian (541-542 AD, with recurrences until 750) and spread like wildfire which decimated approx 30 to 50 million people, perhaps half of the world's population and some others are Black Death, The Great Plague of London, Small Pox, Cholera, but its happening for the first time where government of numerous countries has jumped in the war after the advancement of communication, connectivity and technology. And its for the greater good.


While you and I don't know whether we'll be directly affected or not, but will certainly be indirectly affected. Many industries have ceased their production, the stock market is tanking down, exams are either being cancelled or postponed, various offices, educational institutes are closing, public gathering and TV shows has been postponed, shopping malls and local shops are running out of inventory. Countless places in many countries have been abandoned, hundereds of other events such as the Tucson Festival of Books, the Houston Rodeo and several rallies have shuttered under the threat of corona virus.


As with all the past outbreaks, this one will eventually come to an end.


Till now, we don't have slightest clue of how the virus will behave in summer because most of the past viruses got disappeared in summer. Our health experts aren't just sitting back, they are relentlessly seeking a cure as soon as possible before it start wiping out the humanity from the earth. Until then, what we all can do is to take care of ourselves and family members by practicing some simple yet necessary sanitizing habits directed by WHO, which are clearly mentioned on its official website. As I keep learning more about the severity of cornona virus, I'm personally being eagled-eyed by:


Cancelling all the nonessential travel.

Shunning handshakes, gasp and even hugs.

Minimizing the shopping frequently to once a week.

Washing hands after every few hours, sanitizing devices and not touching face.

The last and biggest desolation ever recorded in the history of humanity lasted for almost two years i.e from January 1918 - December 1920. It was named as: The Spanish Flu. 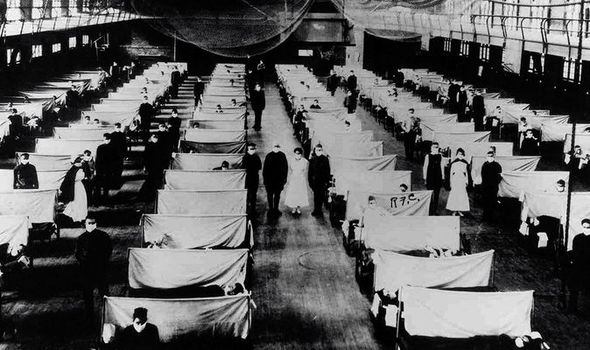 A devastating view of a hospital wherein World War I soldiers and paratroopers are infected from Spanish Flu.

The catastrophic event was thought to have affected 500 million lives worldwide - about a quarter of the world's total population making it one of the deadliest epidemics in human history. But what made the flu to spread on such a large scale?


The first registered case was observed in Haskell County, Kansas, on 4th March 1918. Albert Gitchell reported sick at Fort Riley, a US military facility who was training American troops during World War I and therfore making him the first recorded victim of the flu. Within a few days, 522 men reported sick and by 11th March, the flu had reached Queens, New York.


Whenever an infected person sneezes or coughs, around more than half a million virus particle spread to those nearby. This is what happened with the army soldiers in World War I. As many soldiers were living and sharing eatables with their fellow soldiers and massive troop movements hastened the pandemic and maybe living in huge crowd may also have increased the lethality of the virus. Some people conjectured that soldiers' immune system was weakened by malnourishment and as well as with the continuous bombarding and mental stress might have increased their susceptibility. Once the war ended and people dispersed back to their homes, the spread of virus slowed down as people had less contact. Finally, the flu halted in part because those who survived it had a strong immunity and the virus got extinct. There's a tendency for pathogenic viruses to become less lethal with time. Pandemics end when the virus doesn't have enough susceptible carriers to infect others.

According to a statement given by an infectious disease specialist at the Johns Hopkins University Center for Health Security, Amesh Adalja, MD, revealed that COVID-19 is at least six times more deadly that any other flu we have came across in our lifetime. In addition to that he also said that as the virus has found a way to establish itself inside a human body, therefore a vaccine is the only way to eradicate it entirely. But we have both good and bad news for ourselves. The good news is that recently our health experts in US has developed a vaccine in 42 days but the bad news is that they are still unsure if it's safe and strong enough to completely eliminate the corona virus from the blood streams of humans. Putting it more clearly, experts thinks that the vaccine is likely 18 to 24 months away before releasing it for the public worldwide. This is all what we know about virus and vaccine so far. A New York University law professor Richard Epstein says experts are continuing to develop a vaccine means that they don't think SARS-CoV-2 will disappear anytime soon. If health officials thought the virus would vanish soon, then building a vaccine for the future would not make much sense but it makes sense in which it may not end. As various governments and health epxerts are taking heavy and strict action to supress it; so don't expect millions to die from virus.

In the words of Dr. William Schaffner, an infectious-disease specialist at Vanderbilt University in Tennessee, its unlikely that this coronavirus will ever disappear completely because of its rapid transmission from one person to other. Also, according to WHO, the elimination of such disease is quite difficult and rarely achieved. To make it possible, there must be an intervention between to interrupt transmission, there must be diagnostic tools to detect cases that could lead to transmission and humans must be the only reservoir for the virus, they wrote.


Its quite difficult to predict how the virus will behave in future. Even if the corona virus is eradicated among humans but continues to exist in it natural form i.e in animal reservoirs, then those reservoirs can put the virus back into the circulation. And if we are able to quench the virus, it might turn into a seasonal disease making a comeback every year like any other common seasonal disease like flu or colds. But it's unclear if humans can become reinfected with corona virus becasue our immunity wanes over time which would either make us immune or vulnerable to the virus.


Some of them reoccurs, some of them don't. For example, the virus that caused SARS in 2002 had a relatively low mutation rate while influenza has a high mutation rate and this is why it reoccurs every year. So taking this theory into account, the vaccines scientist are developing right now might fail to eliminate the virus by the time it reoccurs.

Look, I know that our individualistic society is not very good in slowing down. But we must and its only option we have. At least for a while. Although it is no longer about just you and me - but we must consider everyone else, which seems like a paradox when we talk about 'social distancing'. Right now one of the best things you can do is to love people from afar. Even if you aren't worried about yourself, you can still transmit it to the others if you're not careful enough and spreading the disease will lead to greater human suffering.


Let's not panic, but be cautious and act wisely. Even from a distance, we all are in this together. And if you're panicking, indeed, please remember, it is necessary to take this seriously and also lighten the mood with a little humor.


BE CAUTIOUS AND STAY SAFE.

What you should read next...

May'19
The Pursuit Of Happiness 
 Time: 7 min | Decision Making